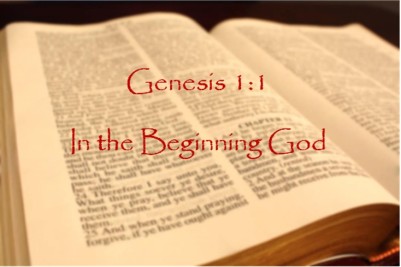 In the beginning God created the heavens and the earth.

When you pick up a book that is as thick and dense as the Bible, being told that it is the very word of the all-powerful Creator of the cosmos, and you turn to the first line and it starts off with the statement, “In the beginning…” you know that you are starting something truly epic. It doesn’t mince words about where it is taking you to … it is taking you to the beginning of all things. The beginning of time itself.

And God was already there.

The first thing that screams off the page, which might seem trite to point out, but is important to note in our secular-naturalist world, is that in the beginning God was already there. He was there before the beginning, He has no beginning, He always has been and always will be. We must remember that when the world wants to try and fit God into a box that lives entirely within the realm of what we can see and observe and within the natural laws of the cosmos as we have come to understand that.

And if that wasn’t enough, the first verse of the Bible continues to emphasize not only the greatness of God, but also the smallness of man. “In the beginning God created the heavens and the earth.” First there is God, then there is the heavens, and then there is the earth, an on that earth is man.

Ponder just for a minute how vast the earth is compared to the size of a man. With our technology we can shoot rockets up into orbit and take pictures of our world, or we can jump into a 747 and fly to the other side of the world in a matter of hours, or we can jump on the internet and send a message to the other side of the world in seconds. All of this makes our world seem quite small, it is a “small world after all”, isn’t it? But if you strip away our technology and just leave us as bare human beings the vastness of the earth compared to our tiny selves is very apparent. We are mere specs of dust on an enormous canvas that is the earth. Up until less than a century or so ago traveling across the earth was a difficult and dangerous endeavor. Up until a few centuries before that people generally didn’t travel the earth at all, but more or less stayed within a few hundred miles of where they were born. The vastness of the earth compared to tiny size of a man was overwhelmingly clear to our ancestors.

But above the earth, stands the heavens.

If we are but a speck of dust on a vast, vast earth; the earth itself is a tiny microscopic spec in the unimaginable expanse of the universe. The billions and billions of stars in our galaxy, and our galaxy being but one in billions and billions of galaxies, and that is just in what we have been able to observe. Who knows how much may lie beyond the reach of our telescopes gaze. No one can truly understand just how vast the universe is. Sure scientists can conceive of enormous distances like the “light year” and then express distances in terms of billions and billions of light years, taking advantage of “scientific notion” to express extraordinary distances with relatively few numbers on a piece of paper. In doing so they write down on paper how big they think the universe is. But just because they can mathematically express it in a concise manner doesn’t mean that even they can truly fathom or comprehend just what those kinds of distances truly are, or many galaxies or stars or worlds are truly out there. Just as our ancestors likely couldn’t truly comprehend in their mind just how big our earth is, even with all our technology and understanding today we can’t fully grasp just how vast “the heavens” really are.

But above the heavens, stands God.

Just as we are but specs on a vast earth; and the earth is but a spec in a vast cosmos; so is that vast cosmos is but a spec compared to the infinite greatness and glory of God. That is what I believe the very first verse of the Bible is trying to say. It is not simply saying that God created everything that we see, but right off the bat the author of Genesis (traditionally believed to be Moses) is painting us a picture of a God that is so much bigger, so much more powerful, and so far beyond anything we can truly every comprehend or imagine.

P.S. To my readers who may be concerned that I spent this whole blog post on just one verse, and thus far I’m only one verse into the ENTIRE BIBLE, please do not be scared away. Not all my posts will be so focused. Occasionally I may come across a verse that has so much weight to it that I believe it warrants focusing an entire entry on that one verse, but that will not be the norm. My next post will cover the rest of the first chapter of Genesis and even a little into the second chapter.

View all posts by thefaithfulengineer